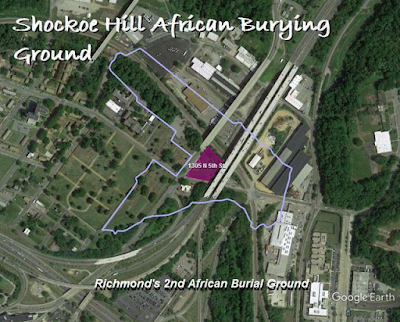 Richmond, VA — Mayor Levar M. Stoney announced today the City of Richmond has acquired the private land on 1305 North 5th Street – the known location of the historic Burial Ground for Freed People of Color [and Slaves.]

Back in February, the city was the only bidder for the property, which was sold at auction for a bid of $145,000. City officials completed the transaction on Friday, April 16 and obtained the title to the property.

The purchased parcel represents 1.21 acres of a two-acre public burying ground established by the City of Richmond in 1816. One acre was set aside for enslaved people and the other for free people of color. The last reported burial was recorded in 1879.

Over the past 200 years, the cemetery was expanded [to more than 31 acres], referred to by various names, and desecrated -- including grave robbing to supply the Medical College of Virginia with cadavers in the mid-nineteenth century.

In 1960, the city sold the property to the Sun Oil Company with no acknowledgement of the cemetery. A small gas station was constructed on the property, and in the 1970s a billboard was erected.

The city’s next step will be to identify funding and to issue a request for proposals for a cultural resource management firm to perform additional research and archaeological investigation, with a view toward proper commemoration and memorialization of the site.

“This important acquisition is yet another step in our efforts to reclaim the hidden and abandoned history of the African-Americans who built this city,” said Mayor Stoney. “If we are to truly reconcile the shameful history of slavery and injustice and heal as a city and a nation, we must respect and honor the memories of those who lived and died under this oppression by telling their stories so they will not be forgotten.”


Blogger's Emphasis and Notes: This acquisition is a good thing, but at the same time, the expansion of high speed rail in Richmond (RTD report) carries enormous potential for direct and indirect negative effects on the historic Shockoe Hill African Burial Ground. This makes the cultural resource work all the more important. The site has been submitted for both State and National Historic Register status.
Posted by Sacred Ground Project