One of the best ways to understand Shockoe Bottom is to visit---on your own or with a guide.

Email sacredgroundproject@gmail.com to schedule a tour!

Gabriel's Rebellion: Death or Liberty in 18th Century Richmond
Duration: 1.5 - 2 hours
We meet at Richmond's African Burial Ground for a discussion tour. We will visit sites associated with the Rebellion while "travelling" from the city's founding at the mouth of Shockoe Creek and the James River, through the first decades of the new American nation to the epic story of Gabriel's Rebellion of 1800 and its impact on politics and Black life after the victory of the Haitian Revolution in 1804, and the abolition of the Transatlantic Slave Trade in 1808 turns Richmond into the epicenter of the domestic slave trade. 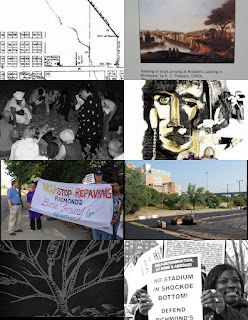 Footprints of the Trade: Walking Through a Way of Life in Shockoe Bottom, 1808-1865
Duration: 1.5 - 2 hours
We meet in front of the Tunnel between the Devil's Half Acre and the African Burial Ground and take you on a walk along one footprint of the slave trading businesses that existed in Shockoe Bottom--east of the railroad tracks to 19th, between E. Broad and E. Main streets--with a narrative thread running from 1695 through Richmond's origins to the end of the civil war, about its social and civic structure as a “slave society”, including co-existence with the pervasive and everyday  the trade human beings. 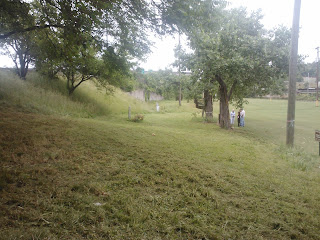 Reclaiming Richmond's African Burial Grounds
Duration: 1.5 - 2 hours
We will follow the path of the old Shockoe Creek through the valley and over the years from north to south - Burial Ground to the west, village of Richmond to the east. This walking tour discusses how the 18th century history of a burying ground becomes the 21st century story of a marginalized community asserting its right to self-determination and its extension to other Black cemeteries established pre and post emancipation also struggling for proper stewardship and care.

Shockoe Bottom is a National Treasure and worth saving according to the National Trust for Historic Preservation
Letter from Chaplain Garland White with the US Colored Troops, written just days after the liberation of Richmond, April 12, 1865.
Community Proposal for a Memorial Park