Most of you who know the work of the Defenders and the Sacred Ground Project know that the core work is social justice and within that, racial justice--the work of identifying, exposing and dismantling racism as a tool of oppression in our world. The Virginia Defender newspaper (formerly the Richmond Defender) and the DefendersLIVE radio show were two of our pro-people, anti-racism media tools. Our prison and criminal justice campaigns along with various housing, utilities campaigns were some of the issues tied to racism and anti-poor or working class work directly tied to addressing the structural power imbalance.

Our principle tenet is that of the "right of oppressed peoples to self-determination in the face of their oppressor." This tenet is about power dynamics. When you walk into a room who holds the most power and who holds the least and how do the two power-holders choose to deal with each other. How does each have their power? Is it one area alone--ability, wealth, ownership, reputation--or some combination of two or more?  Does the big power-holder treat the small power-holding with compassion and share resources to enable a more equitable relationship? Does the small power-holder have the confidence to assert their priorities in a room where someone else can thwart or dismantle their efforts at will? Does the apparently small power-holder begin to figure out that the power they hold is in their very existence, especially in numbers?

How is trust formed when the bigger power can change their priorities regardless of its effect on the smaller power? In the case of a plantation or factory paradigm, such abuse of power can be seen when the owner of a cotton labor camp/plastics factory can decide to cut by 50% the food rations/wages for 250 camp laborers/factory workers to maintain his or her profit margin? I'm referring to the one that lets them buy mansions and airplanes, not simply keep the factory running or the cotton growing.

Speaking of farming, the urban gardening movement in this country is centered in self-sufficiency--knowing how to grow your own food means you don't have to rely on someone else to feed you. Truly basic and truly empowering. And, believe me, we all (the vast majority of humankind) used to know and practice the skills to grow or hunt or gather food (make clothes, build houses). 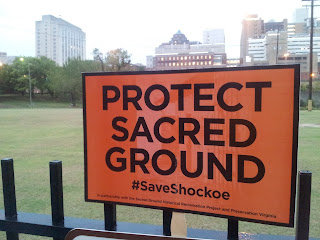 The Defenders antiwar work is also centered on this tenet and embodies within the notion of self determination that of self sufficiency. Understanding why we might be opposed to the violence of war may not be difficult, but understanding why Richmonders should understand why the US should not inflict war on other nations might be a little harder to understand--for example when a vote for a your favorite candidate becomes a vote for a pre-emptive strike on the people of a country you actually know nothing to very little about. Should those people not assert the right to self-defense? The Sacred Ground Project is also antiwar, but not anti self-defense.

The work in Shockoe Bottom--reclaiming Richmond's African Burial Ground, No Stadium in Shockoe Bottom and the Alternative Proposal for Shockoe Bottom (popularly, though incompletely, known as the Memorial Park proposal)--has all been about challenging the status quo to do better, to complete the reform measures and create a new socioeconomic system that puts people first. The Sacred Ground Historical Reclamation Project is not a spiritual approach but that kind of connection to the history and the "ground" of this activity has helped us to understand what connects us across time and geography to the aspirations of the present.

We are not finished.