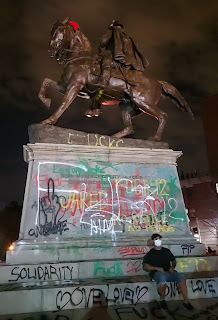 RICHMOND, VA, June 3 -- The Virginia Defenders for Freedom, Justice & Equality, an all-volunteer, grassroots organization that since 2007, on the 200th anniversary of the birth of the slavery-defending Confederate Gen. Robert E. Lee, has been calling for taking down all the city’s white-supremacist memorials, is elated to learn today that some of the statues’ days are now officially numbered. Their demise is long, long overdue.

Local and national media are reporting that Virginia’s Gov. Ralph Northam will announce tomorrow that he will order the 14-foot-tall statue of Lee to be removed from its 46-foot-tall pedestal on Richmond’s famed Monument Avenue and put into storage until there can be public input about its ultimate fate. The statue is state property, and so comes under the governor’s jurisdiction.

Meanwhile, in Richmond, the former capital of Confederacy, which owns the avenue’s other four Confederate statues, Mayor Levar Stoney today announced that he and 9th District Councilman Michael Jones “will introduce an ordinance on July 1 to remove all city-controlled Confederate statues from Monument Avenue.”

The stunning twin announcements came after five days of massive, militant local anti-racist protests triggered by the brutal police murder of George Floyd, an African-American man, in Minneapolis, Minn. On Saturday evening, hundreds of mostly young people of all races, led by Black youth, surrounded four of Monument Avenue’s five Confederate statues and covered them with anti-racist and anti-police graffiti.

On Monday evening, police fired tear gas canisters at a peaceful crowd that had gathered at the Lee statue, a blatant act of brutality that forced the mayor and Police Chief William Smith to later apologize before a crowd of thousands gathered outside Richmond City Hall. That evening, Mayor Stoney, who previously had refused to consider removing the offending states, joined a mass march from the State Capitol Building to the Lee Monument.

“I see this moment as the fulfillment of both prophecy and advocacy,” said Joseph Rogers, a Defender and descendant of formerly enslaved people in Virginia. “Prophecy, because as Richmond’s Fighting Editor John Mitchell Jr. said when the Lee statue was unveiled, Black people were used to put it up, and Black people will be here to take it down. And advocacy, because It’s the result of years of work, decades of struggle.

"And it’s a good start. If we can dismantle the symbols of white supremacy, it means we can dismantle the legacy of white supremacy. We can save and improve public housing. We can fund underfunded schools. We can address police brutality. We can do it for Black folks, indigenous people, people of color, working-class whites. We can do it for all oppressed people across the country, and we can do it right now, in this moment!"

Also commenting was Ana Edwards, chair of the Defenders’ Sacred Ground Historical Reclamation Project and herself a descendant of people sold out of Richmond in the 1840s: “Over the weekend, we watched people in Richmond do what those in authority simply could not bring themselves to do: They contextualized the Jim Crow statues on Monument Avenue, and in the most appropriate way possible.

“The statues finally wear on the outside the true, long bottled-up feelings that anti-racist Richmonders, Black and white, have been forced to carry within them for the last century. Today, our city's leadership, long afraid of taking this step, has at long last discovered the courage of the people and made the decision to remove from our civic landscape these monuments to white supremacy. History is not being erased - it is being made.”

While the Defenders welcome today’s announcements, we want to emphasize that the work of purging Richmond of these racist symbols is not over. There are Confederate statues on the grounds of the State Capitol, in city parks and on the campus of Virginia Commonwealth University. Numerous city streets, bridges and buildings are named after Confederate figures. The entire city is polluted by these racist symbols and needs a thorough cleansing.

And in the meantime, no tax dollars should be used to remove the liberating graffiti from the now contextualized statues.

The struggle continues.
Posted by Our Rosewood