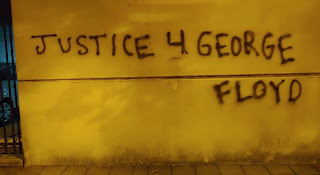 RICHMOND, VA, May 29 -- Militant and at times violent protests have erupted across the United States over the incredibly depraved, racist and brutal murder of George Floyd, a 46-year-old African-American security officer, by a white policeman in Minneapolis, Minn.
Fueling the anger are the Feb. 23 murder near Brunswick, Ga., of 25-year-old Ahmaud Arbery by two white men while he was jogging through “their” neighborhood, and the March 13 fatal police shooting in Louisville, Ky., of Breonna Taylor, a 26-year-old emergency medical technician, killed when officers broke into her apartment under a “no-knock” warrant, without announcing themselves as police.
George Floyd was arrested May 25 on suspicion of trying to pass a counterfeit $20 bill, a minor, nonviolent crime. When he allegedly resisted arrest, Office Derek Chauvin, one of four officers on the scene, placed his knee on the prone, handcuffed man’s neck and, according to a probable cause affidavit released today, left it there for more than five minutes while Floyd repeated over and over, “I can’t breathe!” The officer then continued to hold his knee on Floyd’s neck for another three minutes, after Floyd had stopped speaking or moving.
According to a statement released by the Minneapolis Police Department, 18 complaints had previously been filed against Officer Chauvin with the MPD’s internal affairs division. And, according to a report by CNN, surveillance video of the arrest does not support the police claim that Floyd resisted.
The outrage from the Minneapolis community was fierce. Thousands of people marched the next day on a local police station. Confrontations with the police ensued. Protesters came out again the next evening and the next. On May 28 the building housing the police department’s 3rd Precinct was set on fire. Police assigned to the building fled, and flames lit up the sky. Other fires were set at nearby stores. Video and photos from the scenes show thoroughly multiracial crowds.
Protests have now spread to cities across the country, including Los Angeles; Detroit; Atlanta; Memphis; Houston; Washington, D.C.; and New York City. Many more “I Can’t Breathe” protests are planned for tomorrow.
Here in Richmond, Va., a gathering has been called for 8:30 p.m. this evening at Monroe Park. a traditional site for protests in the city. A graphic announcing the action is emblazoned with the words “Fuck the Police,” a cry heard at many of the actions in other cities. A specifically “peaceful protest” has been called for 10 a.m. Sunday, May 31, on Brown’s Island. Discussions are also taking place among local Black pastors to hold some kind of activity.
The Virginia Defenders for Freedom, Justice & Equality condemn, in the strongest possible terms, the brutal, racist murder of George Floyd, as well as those of Ahmaud Arbery, Breonna Taylor and so many more Black women, men and children. We extend our deepest sympathies to their families and friends. We solidarize ourselves with those who have taken to the streets in Minneapolis and around the country.
And while we applaud the firing of the four police officers involved in Floyd’s death and today’s arrest of former Officer Chauvin, we are outraged that he has only been charged with third-degree murder and manslaughter.
We demand:
As the Rev. Martin Luther King Jr. once said, “Riots are the voice of the unheard.” We would only add that it is the right of a free people to rebel against tyranny - by any means necessary.
--  x  --
Posted by Our Rosewood