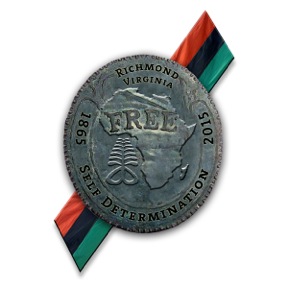 Today I was reminded that the story of Gabriel's rebellion and the site of Richmond's African Burial Ground have continuously inspired creative acts.

On 10 October 2004, the Defenders held a scholars and activists symposium followed by a march to unveil the the historic marker that overlooks the site of the burial ground. The first marker in the city limits, two other marker projects were installed in the 1990s in Henrico County, closer to where the organizing of the rebellion took place that summer of 1800. One is on Brook Road, the other is at Spring Park off Lakeside Avenue.

During the Juneteenth weekend, Elegba Folklore Society conducts an annual Walk Along the Trail of Enslaved Africans and features dance and theatrical interpretations at marker stops along the way.

Historic interpreters have portrayed Gabriel at various venues, including during several of the Civil War and Emancipation Day events during the Sesquicentennial of the Civil War and Emancipation (2011-2015). At the final event of that five-year commemoration, jazz composer Ashby Anderson debuted his suite Undertones: An Aural Memorial for the African Burial Grounds in Richmond, Virginia in a performance by the Afrikan Arkestra in 2015. Untold RVA creates temporary typographic art installations and launched Gabriel Week in honor of the date of the attempted rebellion.

The Afrikan Ancestral Chamber has acted as spiritual guardians, hosting an annual Ancestral Weekend at the end of October, and in 2017 unveiled their installation of an obelisk in tribute to the ancestors buried in the site of Richmond's African Burial Ground. Behind the monument there is a wall which in part bears a portion of the load of Interstate 95 above it. AAC painted that wall with the eye of Isis in a field of deep sky blue.

I remember when an unknown art student placed a small reliquary shrine at the base of a tree on the slope supporting Broad Street. Another year someone suspended a rope with a noose completely covered in flowers. I have done a print and painting of Gabriel, a detail of one of which can be seen in a marker on the site of the African Burial Ground.

Gigi Amateau wrote Come August Come Freedom: The Bellows, The Gallows, and The Black General Gabriel (2014), a young adult historical novel that examines the days leading up to and after the rebellion through the eyes of Gabriel, his mother and his wife, Nanny. Richmond poet Joshua Poteat contacted me back in 2010 to tell me that he'd written a poem about Gabriel and that its conversion into an art installation had won the best in show award in the annual In-Light public art festival in November 2009. His partner in the creation of the light installation was architect Robert Ventura. Photographs by Heidi Hess of the installation are here.

On Saturday, 6 September, NPR's With Good Reason broadcast 400 Years After 1619. Five people were interviewed about this observance and the closing voice was that of Josh Poteat reading an excerpt from his poem, Letter to Gabriel Written in the Margins of Murder Ballads. You can read the entire poem here.

Films: Meet Me in the Bottom: Reclaiming Richmond's African Burial Ground, the 2009 documentary by Shawn Utsey (Burn Baby Burn Productions). Gabriel's Revolt was created by Northern Virginia Community College students just this year and premiered on PBS on 2 August 2019. Brother General Gabriel, a site based dance work by dancer/choreographer MK Abadoo (UR/VCU) will be performed on 10 October 2019 at 6 and 7 pm on the Burial Ground, followed by the Sacred Ground Project's 17th annual commemoration of Gabriel, his fellow freedom fighters and the Burial Ground at 8 pm.

I'm sure I've missed things, and I'm sure there will be more to come.
Posted by Our Rosewood