The City of Richmond is seeking your input about the future of historic Shockoe Bottom. To its credit, the City is asking, “What are your BIG IDEAS?” 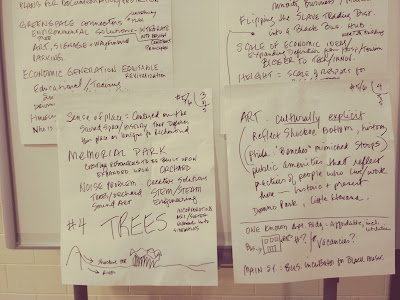 To answer the City’s question -- now, while Shockoe’s small area plan is being written by the City’s Department of Planning and Development – public advocacy is needed to promote the community-generated concept for the Shockoe Bottom Memorial Park. That is, an expansive memorial park that marries preservation, commemoration, education, and equitable revitalization at a scale proportionate to Shockoe Bottom’s nationally significant heritage.

On July 17 the City convened its second public meeting about Shockoe’s small area plan. The meeting room was full of community members. After brief remarks, the community members engaged in dynamic conversations at facilitated tables in the too-noisy room. The City’s goal for the meeting was public discussion about how to physically implement big-picture themes like “history and culture,” “architecture and great placemaking,” and “great spaces: parks and public spaces.”


Memorialization and education are the community’s highest priority. For the community, the Shockoe Bottom Memorial Park is “the ONE thing” that must be included in Shockoe’s small area plan.

Given the central importance of the community’s top priorities, here are a few takeaways about the City’s July 17 public meeting:

The City’s base map and reference booklet to inform the July 17 public discussion do not show existing historic districts already researched and designated in Shockoe Bottom. See, here and below, for the overlapping historic districts that cover the City’s Shockoe study area. The base map for July 17 does point to the linear Slave Trail and a handful of individual historic sites. (And, the reference booklet shows Shockoe’s real estate development potential and the neighborhood’s “unbuilt” and “built” spaces.) But the City’s July 17 material does not show Shockoe’s blanket of local, state, and federal historic districts.

In the National Trust for Historic Preservation’s view, the challenge for Shockoe’s small area plan is: How to manage change within a neighborhood that is comprehensively historic. Not simply how to connect disparate historic points within a non-historic study area. More work is needed to ensure that the full historic value of Shockoe is recognized and protected.

Archaeology is a key opportunity “to promote awareness and understanding of the significant history of Shockoe,” per Mayor Stoney’s Shockoe Alliance vision statement.

Unfortunately, the City’s base map and reference booklet for July 17 contain no meaningful information about the Shockoe Bottom Memorial Park concept. In fact, the City’s presentation slide acknowledging several other “new, creative BIG IDEAS [that the community] would like to see incorporated into a plan for Shockoe” does not mention the Memorial Park concept, a proposal that has been introduced and re-introduced in every public forum sponsored by the City about Shockoe.

For the July 17 public discussion, the City’s reference materials point to the Pulse Corridor Plan, Shockoe Valley Streets Plan, Richmond Bike Master Plan, and the design of the Lumpkin’s Slave Jail site. Despite the City’s good intentions, which we assume, the City’s printed materials for July 17 did not prompt discussion by community members on how to physically implement the community-generated concept for the Shockoe Bottom Memorial Park. This was a missed opportunity to fully engage a BIG IDEA.
The City’s Pulse Corridor Plan recommends that the City “identify opportunities for new park space through the use of City-owned land” and that the City “continue efforts to commemorate, memorialize, and interpret sites of historical and cultural significance.” Importantly, Mayor Stoney’s Shockoe Alliance vision statement calls for the creation of “unique public spaces” for “memorialization, interpretation, preservation, and education.” This is a good beginning, generally.


On July 17 the City asked, specifically: “What does success look like for Shockoe?” In the National Trust for Historic Preservation’s view, success for Shockoe depends upon well-informed public dialogue and a full understanding of Shockoe’s historic resources, archaeological remains, as well as the community-generated proposal for a Shockoe Bottom Memorial Park. 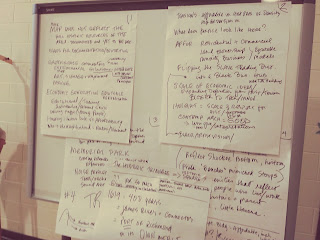