Visits to Krakowa and Oświęcim, Poland 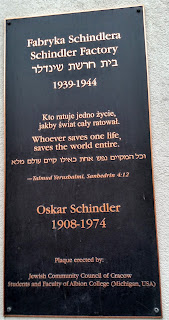 On Tuesday, March 15, 2016, Phil and I visited the Schindler Factory Museum in Krakow, Poland, and met with the executive director - historian Monika Bednarek. We discussed the making of the museum, made famous by the film "Schindler's List", and which is just 5 years old because, we were surprised to learn, the factory continued to operate until the early 2000s. Ms. Bednarek was extremely gracious with her time and information. The Schindler Enamel Factory is one of three sites she directs called The Memory Trail. The other two sites are The Eagle Pharmacy that served the Jewish populace walled off into a ghetto where food was rationed to starvation levels, and Pomorska Street, the German command building and holding cells that housed the resident Gestapo headquarters. www.mhk.pl/memory-trail 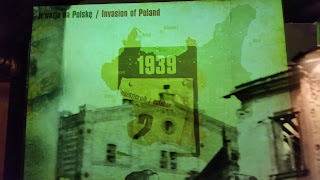 The Schindler museum's exhibits are extensive, robust in archival and tactile material, theatrical, interactive and utterly consuming. You travel from the 4th floor in a twisting labyrinth of places, events, people from just before Germany's invasion on September 1, 1939 through the end of World War II, the liberation of the concentration camps, and into the period of Soviet control. 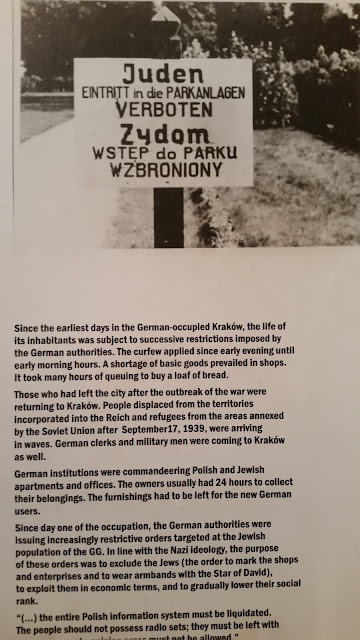 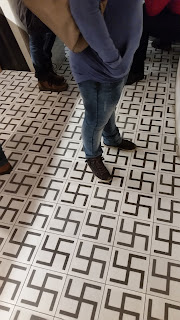 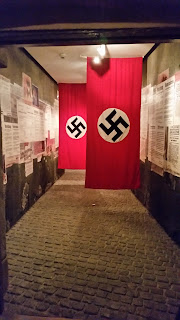 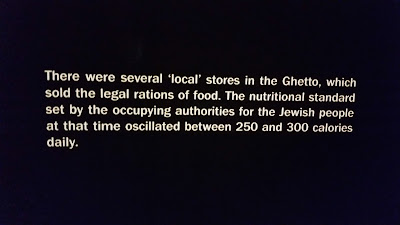 There are places in the exhibit where you can feel so overwhelmed that you begin to look for ways to escape - and there will suddenly be a real window allowing you to see sky and the tops of buildings. You turn away to realize there's only one way out, to push through the experience until it is over. 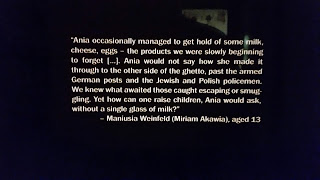 At this moment you recognize that resistance, a determination to survive, to take what control you could, would be both psychologically and in fact would be critical to your survival in such conditions, and would ultimately affect the outcome. This is something we raise consistently in discussing the history and legacy of living in slavery in the United States. 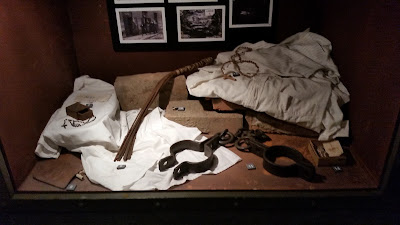 The bus ride west to Oświęcim (Ohzh-vyah-chim) from Krakow took about an hour and a half. The Auschwitz Concentration Camp Memorial is located on the outskirts of this small city. Originally a Polish army base, the Auschwitz camp has become a notorious and lasting testament to the depths of organized depravity that humanity is capable of reaching, as well as the heights of courage and resistance. 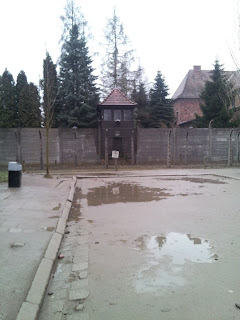 No report could accurately express the feelings we experienced, walking in the dark through the muddy streets past rows of brick barracks in this former death camp. More than half of the barracks building are themselves small museums with exhibits representing either the activities that took place in that building or in other parts of the camp throughout its operation, or about the fates of specific ethnic or national groups. Reporting on our visits to both sites will greatly strengthen our position in Richmond in arguing for the memorial park.

Mini dictionary of terms from Auschwitz
Formally and practically we went to show our respect for those who suffered and resisted there and to see how the Polish government has dealt with memorializing this sacred site. But REALLY, we went because we had to - it was our simple and fundamental responsibility - as social justice workers and as living people.

Phil and I each had our triggers - "things" that hit us hard within the first few minutes of walking through that gate. The words on that gate which read then with horrible multiple meanings for captor and captive alike, still reads: ARBEIT MACHT FREI (WORK WILL MAKE YOU FREE). We passed through that gate. I thought it would have been bigger than it turned out to be: a gate for tank parades and throngs of confused and frightened people. But it was sort of medium sized, wide enough for pairs of functionaries and small groups of guards, an officer's car or a couple carts of supplies to pass through. The gate was, again, a simple, adaptive reuse of an available materials.


For me that was it: the materials. The brick and concrete, iron, creosote, and wood. So beautiful in their own right, so useful, developed over millennium to serve our practical and aesthetic needs. But here every aspect of the look and feel of these materials took on horrific and banal qualities. 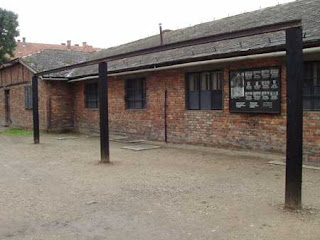 The gallows pictured below are near the roll call station, and were constructed specifically to hang 12 men accused and convicted of somehow being involved in the escape attempt of 3 others. It was an apparatus built to end their lives and display them as a punishing example.

You see no elaborate wooden platforms with steps, railings and trap door - this was a simple, efficient, adaptive reuse of available materials. Three 10"x10" posts perhaps 8' tall with two sections of iron I-beam laid end-to-end on top and bolted together. That's all. You could have hung laundry from it - or engine blocks. Yet, from that device 12 slender ropes strangled the life out of 12 men at once over several minutes. 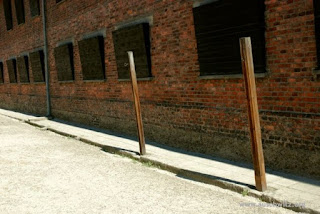 For Phil it was the posts, "pfahlbinden". Again, simple implements made of simple materials. Wooden posts that lean slightly forward, each fixed with a sturdy iron hook. To this the victim's wrists which were bound behind their backs, were attached so the body was suspended at a height so his/her feet could not quite touch the ground, twisting the shoulders until they dislocated, eventually tearing the ligaments. They would be left that way for hours or days. The injuries sustained would often render the man or woman "unfit for work" and therefore condemned to the gas chambers.
It's very depressing.
Everyone must see it.
It will alter you.
Boy in the striped pajamas.
Resist. Remember. Progress.
Posted by Sacred Ground Project