The Picture of the Man who isn't Gabriel

I was recently asked if there are any extant images of Gabriel and the answer is no. In 1800, and in Gabriel's specific situation there would have been only exceptional reasons for a portrait to have been made of an enslaved person. And yet, there is an image commonly used to depict Gabriel, an image that belonged to another enslaved man who saw a path to freedom, and walked it.

Not Gabriel, Still "Gabriel"
The image most associated with Gabriel is not Gabriel, but is of an unnamed man who self-emancipated in order to join the Union Army. From a website called sonfothesouth.net a digitized archive of most of the issues of Harper's Weekly can be viewed and downloaded as PDFs. In this archive are the following two images of the man - before enlistment and after. These are the same images I saw a few years ago at the African American Civil War Museum in Washington DC. This man's story deserves understanding - if not his individual story, certainly the stories of those like him. Harper's Weekly was a pro-union paper and the advocacy for the rights of Africans to seeking freedom in this text is one reflection on this perspective. 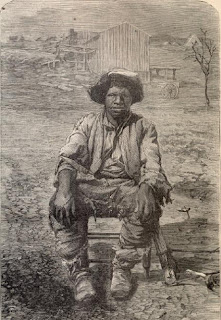 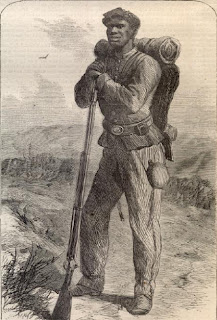 
THE ESCAPED SLAVE AND THE UNION SOLDIER.

SURELY not the least interesting of the varied war pictures which we present to our readers this week will be two sketches on page 428 one, the picture of a negro slave, who fled from Montgomery, Alabama, to Chattanooga, for the express purpose of enlisting in the army of the Union; the other, a picture of this same negro, endowed for the first time with his birth-right of freedom, and allowed the privilege dearer to him than any other —that of fighting for the nation which is hereafter pledged to protect him and his. Are these not affecting pictures which are here presented to us ? On the one side, the poor fugitive oppressed with the weariness of two hundred long miles of dusty travel, a journey interrupted by a thousand necessary precautions, and harassed by timid suggestions of a fate more horrible than death if he is discovered; with his meagre covering of rags about him: and on the other side, the soldier crowned with freedom and honor. Can we not at length have faith in that heroism which has been so gloriously illustrated at Wagner and Olustee and Petersburg, and which, in the face of the Fort Pillow massacre, yet offers itself afresh in the person of a poor fugitive, who, from the heart of the enemy's country, gives himself, at the risk of death or of a torture worse than death, to a cause simply because it is inevitably associated, with the problem of his freedom ?