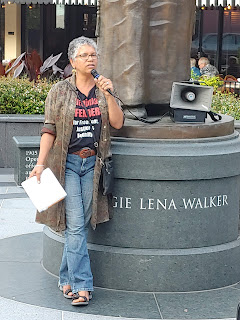 FROM THE CHAIR
The mission of the Sacred Ground Historical Reclamation Project is to draw the connections of past to present into a stronger web of knowledge and planning for the future.
It is our vision that we can strengthen one another's struggles and win victories for a healthier, more humane and respectful world by recalling and promoting the historical people, places and actions that set the precedents for our present lives. This historical awareness will inform our contemporary participation in social, political and cultural dynamics at home and abroad. We are a global society: nothing is new, and nothing is closed to us.
Ana Edwards
Chair, Sacred Ground Historical Reclamation Project
Return and Get It: Learning, Understanding, Strength & Progress
ANA EDWARDS is chair of the Sacred Ground Historical Reclamation Project, a 2004 initiative of the Defenders for Freedom, Justice and Equality, a Richmond, Virginia based social justice organization that grounds its work in the principle of the right of oppressed peoples to self-determination. The group worked for 8 years to help reclaim Richmond’s African Burial Ground and is currently engaged in the community struggle to preserve and memorialize historic Shockoe Bottom through the establishment of a nine-acre memorial park and educational campus.

From 2005-2013, Edwards produced and hosted DefendersLIVE, a local news/talk radio program on WRIR 97.3 LP FM, and since 2005, been a founding member of the editorial board of The Virginia Defender, a quarterly community newspaper, along with her husband, founding editor and publisher Phil Wilayto.

Ana was 2009-2017 president of the Virginia Friends of Mali, an education and cultural engagement organization, which coordinated the establishment of a sister city relationship between Richmond and Ségou, Mali, and continues to organize projects between the two cities,  virginiafriendsofmali.blogspot.com. She visited Mali in 2010, 2011, and 2013, and, until 2021, represented the relationship as a member of the Richmond Sister Cities Commission.

For 6 years Ana managed a weekly farmers market as a nutrition education program an early childhood education center with its origins in neighborhood-centered social services. Before that, she was communications director for Homeward, Richmond’s coordinating agency for homeless services.
Edwards sat on the Future of Richmond’s Past Planning Committee (2011-2015) which produced and coordinated programming to commemorate the Sesquicentennial of the Civil War and Emancipation. She served on the Planning Committee of the East Marshall Street Well Project, established by the VCU Office of the President in 2013 to help determine the best way to study, memorialize and rebury the human remains found in an early 19th century well during the construction of the VCU Hermes Kontos Medical Building in 1994.

Born in Los Angeles, California in 1960, Ana holds a Master of Arts in History with an emphasis on Public History from Virginia Commonwealth University (2020) and a Bachelor of Arts in Visual Arts from California State Polytechnic University at Pomona (1983). She studied fine arts for two years at Mason Gross School of the Arts at Rutgers University. She occasionally makes art, has two wonderful grown sons and a social justice activist-journalist husband.
vcu.academia.edu/AnaEdwards
anafedwards.blogspot.com